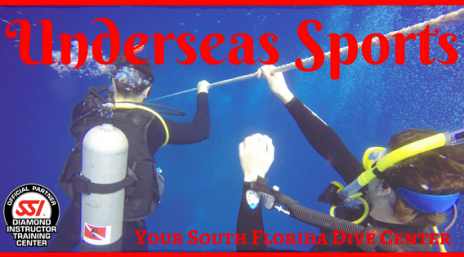 Underseas Sports is Fort Lauderdale's oldest continuously owned and operated dive shop!  Since opening our doors in 1971, we have been committed to providing our customers with the highest quality scuba products, dive training, and repair services the industry has to offer. We train all of our students to be confident, safe, and comfortable divers to ensure the maximum amount of fun and adventure.

Voted Best Dive Shop of Broward and Palm Beach New Times 2014, we're a friendly bunch of folks who love showing others how to enjoy safe and comfortable underwater adventures.  We have four Platinum Pro 5000 divers on staff to offer expert product advice and ongoing support throughout your scuba journey. Additionally, we offer exciting dive trips to both local and international destinations.

No matter your skill level or diving style, Underseas Sports has the products and services to meet your underwater exploration needs. Please don't hesitate to contact us with any questions you may have. We're here to make your diving experience a memorable one!

Brian was certified in 1987 and has been involved with diver training since 1989. Brian holds a Bachelors and Master degree in Marine Biology and is United States Coast Guard Captain. He has worked as as scientific diver for over 15 years, diving with NOAA, EPA, and USN. Brian currently holds instructor ratings with SSI, PADI, PDIC and DAN. Brian is the dive coordinator and lead instructor for the Hollywood Fire Rescue Dive Team, where he currently works as a career firefight/paramedic on the Special Tactics Team. He also continues to work in the diving field as a part-time commercial diver and field support technician, also as a scientific diver for NOVA Southeastern University Physical Oceanography Lab and Fish Lab.
Hugh

Hugh began his diving in the chilly waters of Cape Cod in 1988. When not diving, he took as many dive classes as possible. He achieved the PADI Open Water Instructor rating in April of 1991. In May 1992, Hugh became one of the youngest to achieve the rating of PADI Master Instructor. In 2000, he became a NAUI Instructor and 2001 added SSI Advance Open Water Instructor. Hugh has worked in many aspects of the dive industry; such as instructor, sales, divemaster, store manager, repair technician and dive boat captain. Hugh's knowledge of local reefs allows him to take divers on infrequently visited reefs. His work experience has taken him to the Bahamas, Grand Cayman and New England and a stint as a salvage diver. Hugh has traveled extensively through the Caribbean. The North Wall of Grand Cayman one of his favorite spots. When diving locally,he enjoys lobstering and Lion fish hunting. In September 2012, Hugh achieved the rating of Instructor Trainer from Scuba Schools International. He has taught in many areas; the private sector, public schools and programs for at youth risk. Hugh's greatest experiences have come from the faces of his students after completing their first open water dive and when his student become instructors. His motto is the Coca Cola theme, but he changes it - "If he could teach the world to dive"....